The Opportunity Zones program is a new alternative economic development program established by Congress in the Tax Cuts and Jobs Act of 2017 to foster private-sector investments in low-income rural and urban areas. This is a new program with many moving parts. The Alabama Department of Economic and Community Affairs presents this brochure to give you a basic overview of the program and how it is being implemented in Alabama. 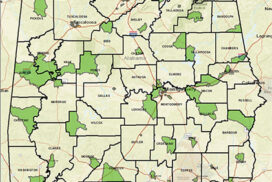 Click the map image to open an interactive version.

What are Opportunity Zones?

The areas eligible for submission as Opportunity Zones are low income census tracts with a poverty rate of at least 20 percent and a median family income of less than 80 percent of the statewide or area median income. Census tracts are statistical subdivisions of a county established by the U.S. Census Bureau. Each tract averages between 1,200 and 8,000 in population and the nominated tracts vary in size from 199 acres to 235,352 acres.

How can they benefit my area?

The program provides a federal tax incentive for investors to use their unrealized capital gains into Opportunity Funds dedicated for investing in the designated Opportunity Zones.

How many Opportunity Zones have been selected?

The Governor’s Office, with the help of ADECA, identified and selected the 158 Opportunity Zones from the qualifying tracts. There is at least one Opportunity Zone in each of the state’s 67 counties.

How were they selected?

The Governor’s Office and ADECA used an objective methodology that involved input from a variety of resources to determine areas where the program could be most effective. Methods used in the selection process included a county-by-county examination of previous designations as advantage sites or industrial sites, a review of aerial imagery for development activities by ADECA’s Geographical Information Systems Unit and data and research compiled by federal, state and local organizations.

Governor Ivey submitted Alabama’s nominations for Opportunity Zones to the U.S. Department of the Treasury on March 20, 2018. The zones were approved by the Treasury Department and the IRS on April 18, 2018.

More information about Opportunity Zones in Alabama is available at OpportunityAlabama.com.